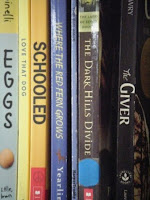 Today, I did my first school visit. I've been in front of a class before. Actually, for 8 years! But this time was different. Today, I stood in front of the class, not as a teacher, per se, but as a writer and it felt great! I loved every minute of it. Well... except the pre-public-speaking-jitters. But once I got started that all vanished. Well... except some physical signs of my nerves lingered... I always break out in a ruddy, hivey, rash on my chest when I'm nervous about something.

*note to self - no matter the season, be sure to wear something that comes up high on my neck!

So, what did I talk about? Well, this was a 4th grade class getting ready to embark on writing their own stories. The teacher wanted her students to learn not only about what it's like to be a writer, but about first person vs third person and POV.

I began by telling them a bit about me, what I do as a writer for a living and about my speculative middle grade novel. I showed them how my idea began on the back of a napkin and then I read the first page of my novel as it progressed through its revisions.

After each first page was read, we discussed if it was written in third or first person, whose POV it was told from, and if it told the reader much about the MC; the setting, genre, etc. They saw how the first draft's first page, although sounded "pretty" really didn't say much about my MC.

Then, we spoke about my third draft and how it began with a prologue. Again, they were able to see it had now moved from third person to first person and the POV was from an object and not a person...

I asked them to raise their hands if they ever read prologues. One student boldly rose her hand. I explained that's why the NEXT draft no longer had a prologue...

By the time we got to my current draft's first page, they were able to identify all the "wanted" elements of a first page; hopefully, a hook that grabbed their attnetion, they knew the MC, her age, her friends, that she was no longer friends with them, and that she was different in a very rare and unique way.

Then we went on to list all the pros and cons of third person and first person before moving on to POV. To really show POV, we listed examples of fairy tales on the board and who the MCs and antagonists were. The kids tried to come up with ways to tell the story from the antagonists view point. Stories to read that do this well are The True Story of the Three Little Pigs by Jon Scieszka and Wicked by Gregory McGuire.

Next week, I will return to lead a writer's circle with them. In the meantime, they will begin writing their stories.

It truly was a lot of fun. I felt alive and happy when I left and now I know, I CAN do school visits! I have plenty to talk about and plenty to share, and the kids were fantastic!

Discussion Topic
Do you think it is fair to charge for school visits if you are not published yet? I did this one for free. But I would like to hear from the peanut gallery! What do you think?
Posted by Sheri Perl-Oshins at 1:57 PM

I think you're smart not to charge. I don't know about your area, but ours has been hard by this recession. I've already planned not to charge if and when my novel is published. That's just my personal preference, I'm sure that other writers feel differently. In Roanoke City, the high school graduation rate is only 58%! School visits will be my way of giving back. I have oodles of teachers who have given me a boost here over the years!

It sounds like you gave them a workshop! I still haven't charged for any of my in-school visits, but I do think we as writers should. The hard part is not being seen as a "parent volunteer," especially if you are one!

Great lesson plan! I think I might try it in my classroom! :)

Amy, good point... maybe it is our way of giving back, especially in a district where we might make the difference by inspiring a child to be a writer, or a reader!

Danette, Yeah, not that you mention it, it does sound like a workshop! They seemed to be very interested. Well, there were a few yawns... And I totally know what you mean about the parent volunteer vs. writer professional. I think because it's my daughters' school, I didn't even think about a fee. If it were some random school the thought would have crossed my mind, but I still don't think I would have charged... I don't know though, I know plenty of writers - published and unpublished who do charge...

Thanks, Beth! Use away my fellow teacher-friend. And let me know how it goes.

Sounds like a blast and like you did great!
I wouldn't charge if I weren't published. And I talk at my kid's school for no charge.

Congrats on your first visit! It's always great connecting with young readers. I think that writers of children's books and YA have the BEST job.

Hey PJ, Thanks! Seems to be the consensus... writers - published or unpublished - don't seem to charge for school visits.

Hey Tracey, thanks for stopping by. It IS the greatest job and it will be really nice when I see my book on the shelves of book stores one day. Being paid to write would be a bad thing either....

Great lesson and I love how you incorporated your own writing.

Charging.. Hmm.. I think it depends on what the author is comfortable with and the agreement with the district.

Thanks, Keri. I thought it might be neat for them to see how the idea began on a napkin and then went through 6 revisions so far. And... it was interesting for me too to see how much I've grown as a writer in these past two years...

Wow ... your visit sounds awesome! And, how exciting to be continuing the discussion with them. What great information to share with them.

Good for you, Sheri - we don't need to be published to bring all that we've learned about writing children's books over the years to teach and inspire kids to write. I think if I were to do a school visit, I wouldn't charge until published and probably not in this economy. When my name is in lights ... I may reconsider. I'm sure you did a great job.
Jeanne

Thanks, Kelly. It was so much fun and I am really looking forward to working with them again on Friday. They are going to share their stories in a writer's critique circle. We are going to go over the rules of critiquing, etc. and they will share. I think it will be inspiring!

Thanks, Jeanne! Name in lights... that will be nice!

how wonderful. congrats! i have never done a school visit but they are slated for the fall. i think with high school students? meep!

I love kids and I love kids' books, so I would totally do a school visit for free, simply because I enjoy it so much. Heck, I'd have any book of mine published for free, too, but don't tell anyone I said that...

Seriously...I think it's difficult for a school to justify paying you unless you have a published book or a professional platform, especially in this economy.

Free visits build your experience and confidence so that when you are published, you already have the skills to knock their socks off.

I have always said I'll do author visits in my county for free, as a way of giving back to the community. Isn't that a nice gesture from unpublished, nobody me? HA!

Looking forward to meeting you next week at the conference!

Cindy, I am sure you'll do fantastic! And the HS students will just be so thankful not to have regular class!

Hey Tara! Thanks for stopping by. I totally agree. The overall consensus of this discussion was... publicity is great and school visits are necessary, but charging, especially for non-published authors, is a no.

I would never charge my daughters' school and I don't think I would charge nearby schools either. UNLESS... they were hiring me to teach a workshop on writing. That seems to be something different entirely. For example, if you deveolp worksheets, and visit several times, and the end result is they each have a story written, that seems more than a school visit but more like an artist in residence workshop.

Thanks everyone for adding your two cents! It was a good discussion.