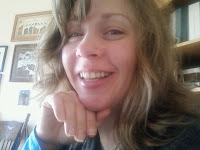 Well, this page can't be all about me. It'd be too long and you'd probably get too bored. So let's see... Where to start. Let's start with my imagination, shall we?

My imagination saved me and got me into lots of trouble as a kid---always day dreaming, always the drama queen, always creating stories. My first story was a letter really. It was a letter to God about my dog and best friend Arrow.

Arrow was a destructive Great Dane and my parents didn't know what to do with Arrow. She had become quite the dilemma.

"I'll drop her off at a farm," said my dad.
"She's not a farm dog. We'll put an add in the paper and give her to a family," said my mom.
"And let her destroy their house! That dog will be back on our porch in two days," said my dad.

I'm not sure who suggested the next bit---"We'll have to put her down."

Now growing up around many animals in a somewhat rural-suburb teeny town, I knew what they meant when the said "put down." They were going to kill my dog!

Rewind... This is the 70s. It's the times of leisure suits and bell bottoms. Hippies were still around and Jimmy Carter was the President. I was a kid raised by somewhat hippy-ish parents. I had ducks, a guinea pig, a floppy eared rabbit, a cat or two or three and one was always having kittens. We had at least two dogs, a snake... have I left anything out? I believed in nature. Hugging a tree was not an outlandish thought and... I grew up to the Beatles, the Rolling Stones, Crosby, Still, Nash, & Young, Simon and Garfunkel and...

Harry Nilsson's The Point in which a little boy named Oblio had a best friend and dog named Arrow. There was a song that we all knew growing up back then and it was called Me and My Arrow.

I was hooked. I was a writer.

But being a writer is hard. It is sometimes lonely, sometimes confusing, sometimes murky, and sometimes... sometimes I feel like packing it all in and giving up.

Because I'm a writer and I can't help it. A writer writes. And even when a writer is not literally writing, they are still writing in their mind. They see the world in narratives and everywhere they turn there is a story to tell.

This is my story. My journey from an unknown stereotypical writer trying to make it and hopefully you will join me for the ride. But I warn you, it is not always pretty. Any artist can tell you that. We are emotional and sensitive and live life feeling every minutia of detail and emotion. So hold on tight. This is going to be a bumpy ride!
My pets today... Oliver is our newest member. He is an orange tabby with a lot of sass. McKenzie is my ever faithful companion, part collie/part shepherd. And Luke, the comedian has his own agenda at all times. He's a Caryn Terrier. A life without pets is a life without unconditional love! 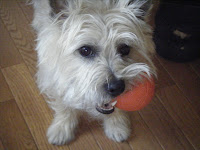 Home
Subscribe to: Posts (Atom)
“Personal limitation exists only in our ideas of who we are. Give up all notions of who you are and your limitations will vanish.”