I have been working on a middle grade novel for almost a year. I am on my 6th revision. And sometimes, like today, I just get stuck. My brain gets thick like fudge and I can’t think anymore. Then, you add heartache and grief from my computer, and I reach my all time limit of frustration. So what’s a writer to do…

Without a thought to stop me and pull me back to my computer, I throw on my Uggs – it is finally cold here in the North East – grab my favorite mittens, paper, pencil, tissues, a bottle of water, and my faithful companion, McKenzie, my collie/shepherd mix. 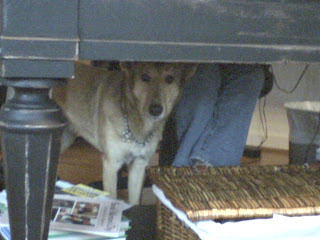 Kenzie, hiding under my desk as I type away...

Ah the fresh air! I take deep breaths in and let it all out. I am ready, strapped with all the arsenal a writer needs – stimulation, freedom, and fresh air. So we walk, McKenzie, sniffing out any possible dangers that lie ahead, and me, staring up at the naked branches above. See, my story is about trees. I love trees and being in nature, and when I feel all clogged up inside, I need to get outside and listen to the trees.

It is great to live amongst the trees and a river. I love being on the canal listening to nature, smelling nature, seeing nature. And I come alive. Thoughts fill my head, tumbling one after the other, like the graceful autumn leaves themselves. I find a rock to sit on and take out my paper and pencil while McKenzie stands guard. And I write. I write at a feverish pace. I throw all mechanics out the window – spelling, grammar, complete sentences – none of that matters when a brainstorm thankfully hits. I just write. And when I am done and I know I am on the right path, I exhale.

It’s always the same. It feels as if I haven’t exhaled in maybe years. But when I do, I know I am done. And then I walk home, bound with my brainstorm of fresh ideas - a gift from the trees. My head is now clear, my cheeks are cold and pink from the crisp autumn air, and I am ready to begin again 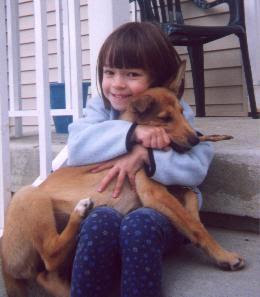 Kenzie, as a puppy being loved by Emily

Welcome and my Intentions...

The intention for this site is to inform other writers how to get started being a children’s book writer. There will be postings on standard formatting, how to make revisions, how and when to submit, and just in general, the things a new writer needs to know in order to really try this career on for size.

It will also serve as a diary for me; sharing my experiences, triumphs and tribulations, as I also navigate my way through becoming a published children’s book writer.

I hope you will learn as I learn. I hope I will inform and inspire as I become informed and inspired.

I know my first posting was very long, but hey, I'm a writer - what'd you expect!

A Writer was Born

Most writers will say they have been writing for as long as they could hold a pen. I suppose I am no different. But how many can remember the precise moment they learned the power of the written word. I can.

See, I had a dog. But she wasn’t just any dog. Her name was Arrow and she was a jet-black Great Dane with a pure, white arrow head on her chest. To me, she was the most regal and beautiful dog I had ever seen. I was nine…

Arrow was my best friend and the name of a popular song back then, “Me and My Arrow,” by Harry Nilsson from his album, The Point. OK, so I just dated myself… the point is, I loved my dog as any child does.

But there was one… kind of… smallish problem about Arrow. She was destructive!

That is not a word you want to use in the same sentence with "Great Dane." She scratched the molding around the front door of our old Victorian. The wood work was part of the charm and period flare of our house – and not easily replaced. She was also very smart. She knew how to open the front door and let herself out. But she was loyal. She would never run away. She just loafed around outside until someone noticed she was missing.

But then there was that fateful day when my sister, my mom, and I returned home from a day of clothes shopping...

Arrow had eaten the couches!

Now that I am a mom and have couches of my own, I can only imagine how horrified she must have felt. We had two brown velvet couches and a white shag rug – now I have really dated myself! There was fluff and stuff everywhere. That was my parents’ last straw.

Now, I am sure the other members of my family will remember this very differently. Actually, my sister, will probably argue that it never happened at all, but I profess that what I say next really did happen. The next morning, my parents were discussing the (Ahem) Arrow Dilemma. “What should we do with her?” my mom questioned. “We can’t give her to a farm. She’s not exactly a farm dog,” said my dad. And then I heard it. Now, I can’t say exactly who suggested it but my heart stopped dead. “We might have to destroy her.” I had been around animals long enough to know what that meant. They were going to kill my best friend!

As the youngest children are sometimes… well… ignored, I tried my best to get everyone’s attention to fight against all hope that this was a most ghastly solution. But no one would listen to me. I yelled. I hollered. I stood on a kitchen chair, but the grown-ups just spoke around me. So I decided to do the only thing I could think of…

I wrote a letter to G-d.

I wrote, “Dear G-d, my parents want to kill my best friend…” I am sure it was eloquently written with much drama and love. When I finished I pondered, how I would get this letter to G-d? Finally I thought mothers are the next best thing. That meant I had to find the perfect place where my mother would be sure to find it.

So, I asked myself, where do mothers go where no one is allowed to follow them, yet they would have peace and quiet to concentrate? THE BATHROOM! I ran to the bathroom, with letter in hand, and strategically placed it on a little marble cabinet we had right beside the toilet and I waited. And I waited. And I waited. Until finally my mother went in and shut the door.

Now I can’t say for sure that she read my letter, but I will tell you this… When she came out she gave me an especially long hug, and Arrow lived a long, long life for a Dane, and a writer was born!
Posted by Sheri Perl-Oshins at 3:08 PM 7 comments:

Labels: a writer is born, dogs, Me and My Arrow, writer
Newer Posts Home
Subscribe to: Posts (Atom)
“Personal limitation exists only in our ideas of who we are. Give up all notions of who you are and your limitations will vanish.”