A century old tub.
Who has soaked in here before me?
I close my eyes and sink down deep.
The water cascades, suds encase,
eyes slowly close.

I am him.
I feel the hair on the small of his back
as he sinks down deep.
He’s slight of build,
Rib bones, stomach muscles, backbones,
Five O’clock shadow sprinkles his face.
The man of the house.
Dark earth beneath his nails.
A farmer,
ploughs his land and
harvests his bounty.
A good long soak
will do him some good.
He closes his eyes as

I open mine.
Bubbles cover all but
the round parts,
which peak out like mountains
in the faraway Pacific.
Who else?
I wonder.

All layers have been peeled away
in a heap upon the floor.
Brown hair,
thick ribbon curl
from the day’s bun.
Tea kettle screams.
Fire crackles
But now’s her time to hide
away from the bustle of downstairs.
She’s a pianist.
Talented.
But that doesn’t much matter
for a woman
from the Victorian Days.
No time for idle dreams
There’s children,
and cooking,
and a man’s life
to shadow.
She sinks down deep,
suds to the part of her lips.
She closes her eyes as

I open mine.
I’m a writer.
Talented?
That doesn’t much matter
for a woman
who’s no money
to pay the bills
and put food on the table.
For a woman,
whose romantic-less marriage
bounds her
to the earth where
words trap her
even as she relishes the
buoyancy
of a bath
in a century old tub.

But I grew up in an old Victorian house.... a poor man's Victorian, they call it because it didn't have all the elaborate ginger-breading known to houses of that era.

The house I recently moved into dates back to the 1700s. That's almost 300 hundred years old (or more) depending on when in the 1700s it was built.

I am in love with the idea of time and place.... of the history of a place, or an object. That some one's feet touched these floors maybe 300 years ago. That some one's hands touched all the brown and black swirl doorknobs.

Structure: I suppose there really isn't any. I am not a trained poet, (as perhaps you can tell) although I have been writing my brand of poetry since I was very young. I don't worry about meter or any of that. I am free-verse all the way and I can understand how some learned poets might adequately argue that what I present here to you is not poetry at all.

It doesn't' matter to me. I do it anyway. Regardless.

I tried to mirror some words and show a relationship in my imaginings about the man compared to the woman....
rib bones, backbone: ribbon curl
five o'clock shadow: and a man's life to shadow.

Personal Notes: I also want to say, the idea of a romantic-less marriage is not the same as a loveless marriage. Those of you whom have been married for 15 years or longer, will know that sometimes romance leaves and life takes over. You get caught up in the day-to-day-ness of life. And marriage becomes a part of that. It must be a goal to make sure it's not. But this is what I'm referring to here...

Also, let me put your minds at ease in case they're not; I do have money to pay our bills and put food on the table. So why did I write that? For the past 5 or 6 years or so, money--or not having enough of it--has been a constant struggle. We, like many Americans, were badly affected by the economy. I lost my teaching job and was unable to replace it. This is why we recently moved. To begin again. Life in our old house was a struggle to afford. The choice between which bill to pay, to put food on the table... these were real struggles for us, but no more. However, living life with that stress for so long, changes you. One way is even when you can afford your life, you are so used to living in fear of it that you feel like you are constantly waiting for the other shoe to drop. Secondly, and most importantly, you begin to see the things that are truly important and you teach these things to your children, who will hopefully grow up more frugal and wiser as a result. I am thankful for our struggles. They have given us a perspective we wouldn't have had otherwise.

In the phrase, "...words trap her..." For me this means that, even with all that said above, it is still a constant state of confusion trying to make it as a writer, or any other artist for that matter... Do I get a paying job or continue writing? Can I do both? I've tried to do both before and quite unsuccessfully, too, I might add. It's easier to balance everything in my life with a part-time job but good part-time jobs are hard to come by... and in a full time job, something has to go. Writing is unfortunately that thing. So, I am trapped and freed by my words simultaneously. This is the artist's struggle. Is it not?

And for those of you with trashy minds... just remember, knees are round parts that stick out like, err... um... mountains, too.

Yes, Yes, I know. I don't call. I don't write. I just disappear for long periods of time. I understand. If my readership is still out there, you might be annoyed with me. To that, I say...

Let's just say, life had it's way of saying, ME FIRST! and I had to give in to it, to surrender.

So, that's what I'm doing now. Reclaiming my life.

Today, I said yes to everything I wanted to do.

Today is the first day of the rest of my life.

With all of that confessed, thrust upon you, I am here to say, I am back. Truly back, for good.

This is a writer's blog and a writer must write. The emotional turmoil is behind me, the inner distractions have all been met. Time to reclaim my writer's soul. 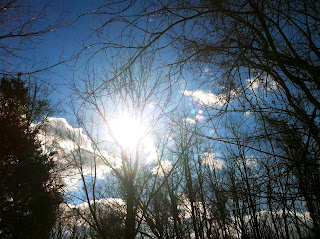 A braided branch
A yellow eye in the sky
A century old tub
Who's soaked in here before?

In this moment, I love my life.

A leaf runs alongside me.
A trusty collie by my side.
My babies are mostly grown.
I remember when

like a fisted bud,
opened with each breath I took.
Now, my petals arc,
revealing my very center.

They sprinkle below me.
My toes sink in the
soft, cool, early spring earth.
Moss, Buttercup, Clover

Is my life lived,
time to step aside
for two fisted buds,
named for loved ones past?

The sun spots me.
Savior.
A black bird laughs.
Some petals have yet to unfurl.

Posted by Sheri Perl-Oshins at 4:28 PM No comments: